DAVE HILL ON JANUARY 12th AT THE TIN ANGEL! 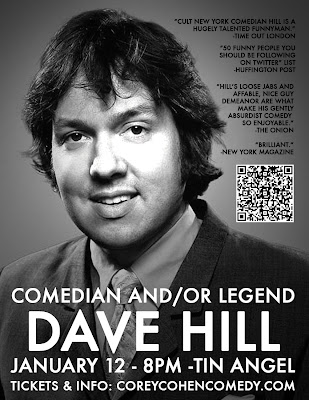 One night only, come enjoy a classy night of comedic entertainment and awkward glances with NYC's own Dave Hill!

Dave Hill (http://www.davehillonline.com/), former King Of Miami and current King of Metal Guitar, is a comedy fixture in New York City, and is well loved by British people of all stripes. Here is what some reputable folks have to say about him:

“Hill’s loose jabs and affable, nice-guy demeanor are what make his gently absurdist comedy so enjoyable.”
-The Onion

What else do you NEED!? Fine, we'll also include two of Philadelphia's finest young talents:

Nikki Walter (http://www.twitter.com/TurboGrandma) - All over Twitter, Nikki is a self described "contributor to WitStream.com and @LIFECOACHERS, ardent guacamole snob" A woman after my own heart.

Don't miss this show! The bartender will make you a gimlet if you ask politely, and the whole damn thing is only 10 BUCKS! See you there!
Posted by Corey on 11/30/2011